Edge of Chaos is a loosely defined concept and a phrase coined by Christopher Langton in 1990. The phrase originally refers to an area in the range of a variable, λ (lambda), which was varied while examining the behavior of a cellular automata (CA). As λ varied, the behavior of the CA went roughly through a phase transition of behaviors. It is a general, vague and ambiguous phrase, sometimes used in a more or less concrete context, but more often it is used as a coarse metaphor for a phase transition, a critical point with maximal complexity or a boundary between order and disorder, stability and instability, regularity and irregularity, organization and chaos. In other words it marks the boundary between order and chaos. 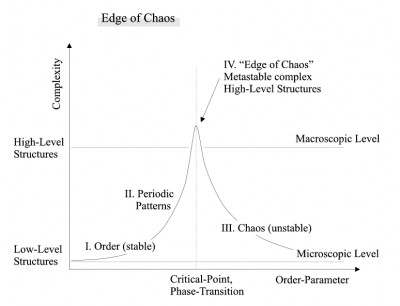 In the sciences in general, the phrase has come to refer to a metaphor that some physical, biological, economic and social systems operate in a region between order and disorder (characterized by randomness or chaos), where the complexity is maximal. In this general case it describes a point of transition between order and chaos, between stable, solid, frozen and crystalline behavior on one side and unstable, chaotic and noisy behavior on the other side. The LINUX community for example is sometimes addressed as A bazaar at the edge of chaos.

The following frequent statement is obviously very imprecise: many complex adaptive systems, including life itself, seem to evolve naturally towards a regime that is delicately poised between order and chaos. Do living system evolve to the edge of chaos, or preferably at the edge of chaos?

The term edge of chaos refers originally to an area in the range of λ, which was varied while examining the behavior of a cellular automata (CA). As λ varied, the behavior of the CA went through a phase transition of behaviors. For a given CA rule table, λ can be computed as follows: one state q is chosen arbitrarily to be quiescent for a CA. The λ value of a given CA rule is then the fraction of non-quiescent output states in the rule table.

If you consider only λ in the range 0 <= λ <= 1/2, because every CA with λ > 1/2 corresponds to a CA with λ < 1/2 after interchanging the roles of black and white cells, you can observe another "edge of chaos". As λ increases, CA roughly go through the four basic Wolfram classes in this order: I (fixed), II (periodic), IV (complex), III (chaotic). Class IV can be seen as the edge of chaos at the boundary between class II (order) and III (chaos), see [1]

If the four Wolfram classes are ill-defined, as Eppstein argues, it is doubtful that this definition still valid. There are roughly two useful definitions of "edge of chaos", one in the more specific sense of Self-organized criticality and Phase-Transition, the other in the more general and descriptive sense of border between order and chaos:

The first definition is a specific definition related to self-organized criticality: The edge of chaos can be found at a critical point with strong fluctuations and scale-free correlations. Systems can cross this point more or less rapidly, but usually they evolve to this point, i.e. they are evolving to the edge of chaos. A sandpile for example evolves naturally towards a certain shape if we add grains to it, until it has a certain critical slope. This point can often be measured precisely (for example lambda=1/2 for Langton's parameter, a certain critical slope, or a critical temperature like 100 Degrees).

The second definition is a more general and less precise definition: The edge of chaos is the general point of highest complexity between order and disorder or regularity and chaos. It defines the small region with highest complexity between order (stability, no change or periodic change, rigid or fixed structures, too static) and chaos (instability, constant or aperiodic change, no rigid or fixed structures, too noisy). The evolution at this point, at the edge of chaos, produces naturally the most complex structures in adaptive systems, because the complexity in the environment reaches its peak here. This point can often not be measured precisely (for example lambda somewhere between 0 and 1/2, except the transition or accumulation point on the period doubling route to chaos.)

As you go from the unified, ordered and regular phase stepwise to the diverse, disordered and chaotic phase, you reach a complex phase transition point between unity and diversity which can be characterized as unity in diversity (or vice versa). Similar to the peak of complexity at the border between order and chaos, we get in fact complex small-world networks if we add randomness to order in regular networks, and complex scale-free networks if we add order to randomness (through preferential attachment) in random networks, see also the entry about complex networks.

The first definition (1) related to self-organized criticality describes a point and a state where the system evolves to, where the overall system is evolving to the edge of chaos, whereas the second definition (2) related to phase transitions describes a point and place in an environment where other systems can evolve, where systems are evolving at the edge of chaos.

What both definitions or "edge of chaos" types have in common is the following:

At the edge of chaos local microscopic influcences can have far-reaching macroscopic effects. Therefore another definition maybe a system near a point with sensitive dependence on initial conditions ("Butterfly Effect"). A small step ("over the edge") can have a large and dramatic effect, or nearly no effect at all. The macroscopic behavior of such a system can change dramatically as a result of small changes in microscopic conditions.

The activity in the Game of Life is on the edge of chaos in several ways. It is on the edge between growing and shrinking, between expansion and contraction. Some clusters grow, others shrink. In the Game of Life you can observe all different forms of behavior: stable objects, propagating objects like gliders or spaceships and instable objects like the R Pentomino. A Glider has five active cells, and propagates virtuously and silently through the empty space. The R Pentomino has a five-square shape, too. It looks very simple, but it creates a wild flurry of activity. Both structures seem to be near the edge of chaos: with a change in only two cells you can switch between both, but the one creates a chaotic proliferation of activity, while the other remains harmless.

Emergence of rules and evolution of laws

Selfish agents and people will recognize the need for conventions, rules, norms and laws (most) notably if their personal interests are heavily violated. People will cry for a law against theft or murder if it happens to themselves, if their things are robbed or relatives are murdered. They will long for rigid and strict traffic rules if they are seriously injured or killed in a traffic accident. They will appreciate culture and long for justice and peace after times of trouble, after "dark ages" with constant conflicts, battles and wars (the "warring states period" in ancient China, the Middle Ages in Europe, the Dark Ages in ancient Greece, the "intermediate periods" in ancient Egypt). In other words, conflicts, battles and wars will increase the threshold of constraints and restrictions that people are willing to accept.

If we consider for example the transition from loosely coupled tribes to the first cultures and states, we can not observe a clear self-organization into more and more complexity. People in the Bronze Age didn't sit together and said "we need to create a society based on parliamentary democracy". What we observe is first war, fight and terror. War of everybody against everybody. After one has won, usually a kingship, a tyranny or dictatorship is established. That's a transition from chaos and anarchy to chiefdom and hierarchical order. Because many people are not satisfied with tyranny or dictatorship, eventually a revolution breaks free, chaos prevails, and the same process starts all over again.